I am your new running overlord. Lo, my face is tidy and my physique is admirably skinny.

… and it’s both terrible and wonderful.

Can I be harsh here? Of course I can; it’s my fucking blog.

I recently saw a mention of the possibility of an Oatmeal Generation of runners in the works. This is really interesting, especially given that the bulk of Oatmeal readers are in their early 20s and might not have a history with exercise. If a good portion of them take up running, we could have quite the bump in running participation. It has happened before…

Running has been through quite a few little boomlets in the past 40 years, either competitive or participatory in their orientation. Some have stuck around for decades, while others peaked and then fell due to catastrophe or just general trends in the larger society. Like the 1970s which culminated in the Jim Fixx apex (and sort of backlash after his death) and the 1980s and 90s Jeff Galloway devotees, and the post-1995 Oprah legion of marathon completers, and recently the Born to Run crowd. The most recent crowd is a harbinger of the Oatmeal Oodles, with a return to running as a natural human activity that brings joy and peace completely independent of competition and even racing. 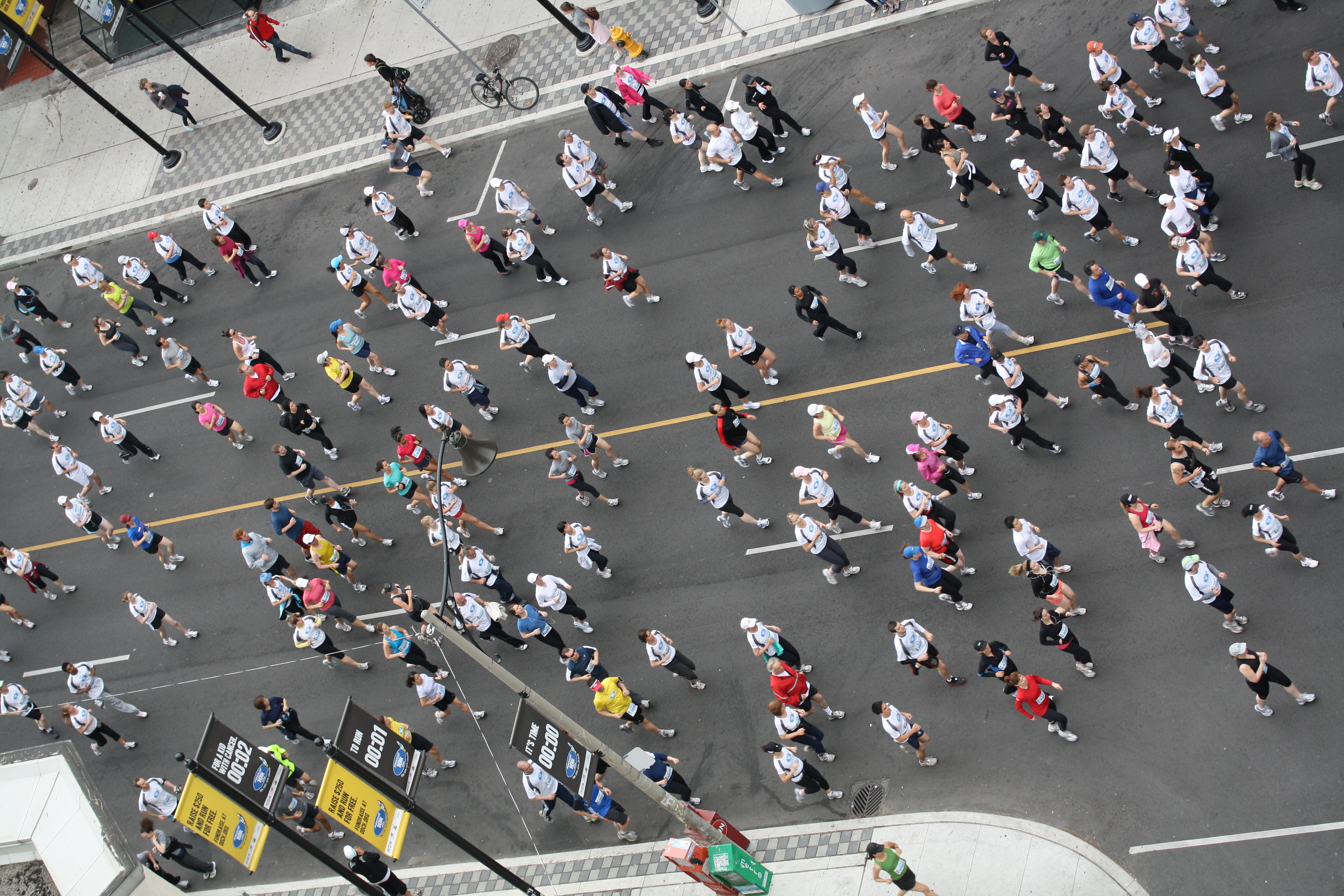 The economic impact of running cannot be ignored. It has a noticeably good effect on the overall economy, in that it drives a shit ton of purchases. Just ONE race, a popular 12K event with 50,000 participants, drives an estimated 10 million dollars into the local economy. RunningUSA compiles great statistics about runners in the country, and as of 2012, there were 487,000 finishers of marathons (a slight decrease) and 6.2 MILLION finishers of 5Ks (a 17% increase just over the year before). That’s a heck of a lot. That is a heck of a lot of business for companies like:

Also, to add to that rather significant contribution to the economy, consider that someone who might not even go out to eat that much is likely to want to splurge on a big honkin’ pizza after that long weekend training run, or a few beers, or some oversized bowl of pasta. The running boom just keeps giving and giving to corporations’ bottom lines, with very little overall effect on health outcomes.

Why Are the Oatmeal Oodles Wonderful?

Basically, a new crop of runners could be a good thing because The Oatmeal’s ‘brand’ of running is that of personal exploration, not of competition or acquisition of race medals, despite the economic junk I just threw at you. The good about running? Honestly, running, once you have at least a little bit of fitness, is quite fun. Research backs this up – you create happy chemicals when doing a run that don’t often get the chance to appear in the course of taking, say, a daily walk. Matthew Inman, aka The Oatmeal, is a Born to Run kind of runner. He does it to challenge himself and does race occasionally, but it seems that his joy from running is the foundation from which all other ancillary activities grow. His comic, inspired by the novelist Haruki Murakami’s memoir about  running life called What I Talk About When I Talk About Running, is called The Terrible & Wonderful Reasons Why I Run Long Distances. And now, since I began to write this post months ago, there’s an Oatmeal sanctioned/created/endorsed race. A real bona fide honest-to-gawd race. In the spirit of the blobby character who is every runner’s nemesis, it is called “Beat the Blerch“. Now, if Inman had wanted his legion of fans to really emulate him, he’d have started a 50 mile ultramarathon, the kind that he wrote about in an earlier comic. But it’s actually great that this race starts with a 10K. It is a good chunk of miles to bite off, and actually not as painful to race as the more popular 5K distance. There is also a half and full marathon distance for those who want to be out eating cake for much longer (oh yes, the races will have cake). The Oatmeal’s legion of fans is so, well, legion, that the race registration site crashed and entries were sold out in a matter of minutes. No surprise there.

Running, per se, isn’t the best way to get in shape or lose weight. (This is the topic for another upcoming post.) If these new participants are doing it just for the joy, then, OK, no argument here. But if they associate it with getting skinny and eating all the shit that they want, they’re dead wrong. Sorry, but it’s true. (But hey, at least it won’t ruin your knees. Can we finally put that misnomer to bed?) With all the talk earlier about how awesome this sport is for the economy, it might have a slightly negative effect on individual runner’s pocketbooks. First, because someone has to MAKE all of those purchases, but also there are doctor’s visits from injuries and sick time from work if one gets overtrained or REALLY injured. No gear, no fear.

And all of those economic perks are a sign of our tendency to overcomplexify everything we do. You don’t need all of that shit. You probably need some shoes and clothes that won’t rub raw spots on your skin when you’re out and about. That’s all runners had generations ago, and they still made those happy chemicals just fine. Getting overly concerned about having all the right gear isn’t unique to running, of course, but it certainly can add stress to something that really should just be plain fun.

A Takeaway, Of Sorts

I embrace any interest in physical activity. I reject the notion that it requires more than a few dozen dollars’ worth of expenditure. I think between those two ideas, we can have a lot of young and excited runners to come in the next decade. Let’s not “Americanize” the very act of running with stuff and stuff and stuff, and we should be just fine.

2 thoughts on “The Oatmeal Generation of Runners is Coming”