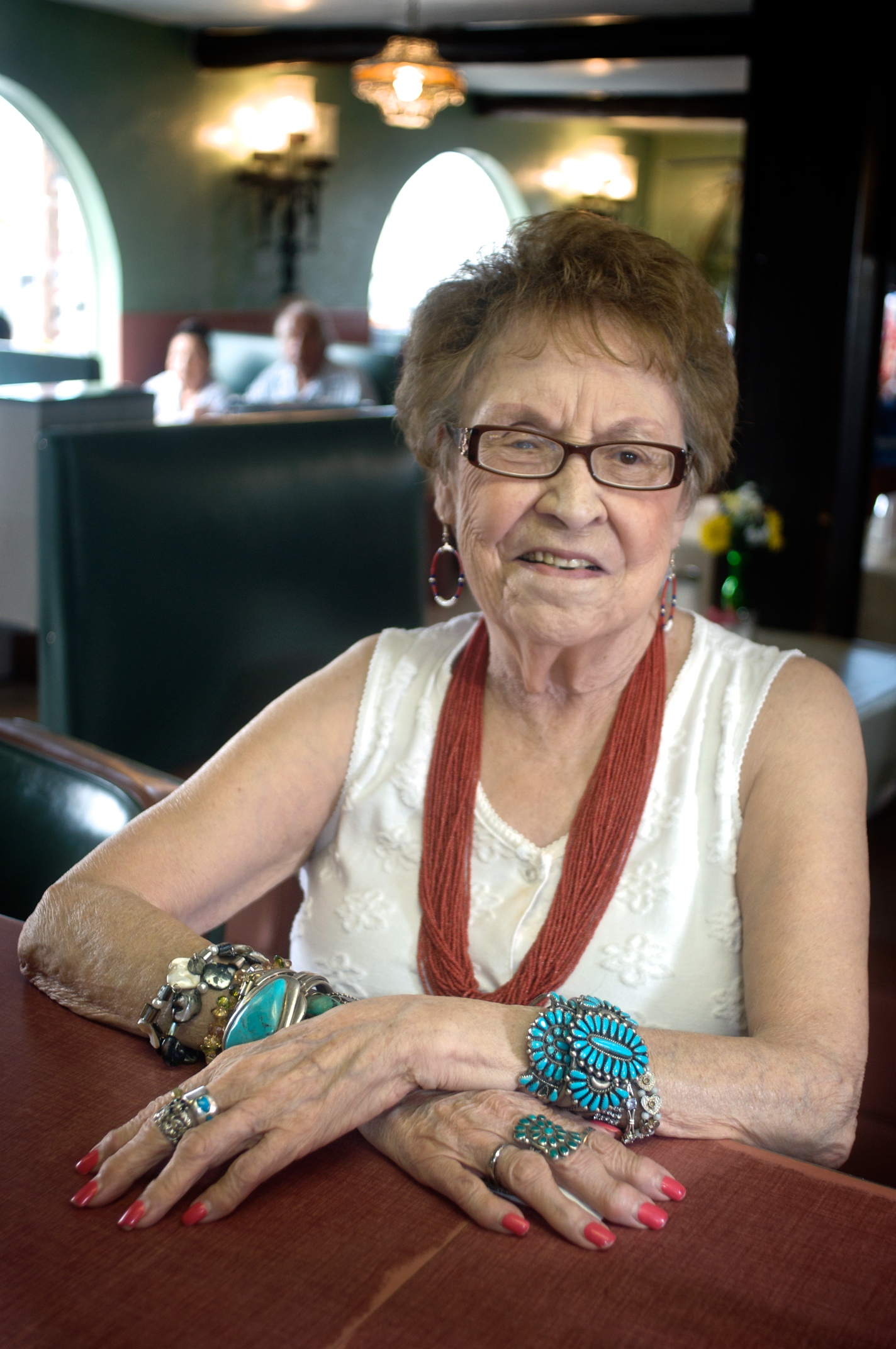 On Tuesday, September 17, 2013, Albuquerque lost a legend of local culinary genius: Mary Gonzales of Mary & Tito’s Cafe. Mary, originally from Santa Fe with Spanish ancestry, managed the restaurant she and her husband Tito founded in 1963, with the enthusiastic help of her daughters and cooks that have worked for her for over 30 years.

I had the honor of interviewing Mary in 2008 for an article about their recent James Beard American Classics award, an award they won three years in a row. She was also featured in an Edible article from 2010 about food treasures on North 4th Street. Here is Mary’s story, from my interview notes and my history with dining at Mary & Tito’s. Enjoy.

My first encounter with Mary was about 10 years ago after a tip from Jason Sheehan (the Alibi’s food writer at the time); I was enjoying some fabulous red chile as she perched in the corner of her dining room, ringing up checks and greeting regular customers with a huge smile and about six pounds of turquoise jewelry. She was your mind’s incarnation of a perfect New Mexican grandma, never a matriarch with too much time on her hands, just a gentle person with a smile for everyone.

Tito had just retired from the military and after two weeks of “unemployment” he couldn’t take it any more and decided to open a restaurant. Mary was working downtown at the court and he showed up one day to inform her of his decision. She was pretty dubious about the prospect.

I thought he was out of his mind to open a restaurant!

They opened first at 4th & Mountain with a 5 year lease before moving to the current location. For 10 years, Tito did all of the cooking with one dishwasher and one waitress; after a big expansion into a new building extra help was needed both in the kitchen as well as in the dining room. From the very beginning, Tito served up red chile by the bucket as well as something he called a Mexican Turnover – what we now know as a stuffed sopaipilla. For all I know, Tito freakin’ invented stuffed sopaipillas, right here in downtown Albuquerque, five decades ago.

In 1989 Tito passed, and Mary kept up the very popular business with the help of her daughter Antoinette and long time employees. They continue to make the red chile sauce just the way Tito taught them, from whole pods from Hatch, NM. Here’s how: the pods are washed, boiled until soft and then hit with some serious blender action. Into a huge stockpot the vital red slurry goes with a “tiny” amount of shortening and salt to season, then cooked for another half an hour. That’s it – you can make your own red chile in the style of Tito, but you will not get near the experience of actually eating in this comforting establishment that feels like home. Even Mary had little interest in non-local cuisine; while she like most folks she has a sweet tooth, when asked about her favorite non New Mexican food she was clear:

Mary was beloved, and that’s a great thing. She WAS appreciated while she was still around, and I hope that she really understood how much people were in awe of her contribution to the Albuquerque food scene.

2013 is the 50 year anniversary of the start of Mary & Tito’s, five whole decades since Tito marched up to Mary and said, “I’m bored. I’m starting a restaurant.” We’ve all been rich with New Mexican spice ever since.